Malcolm Green: The Mystery of Long Meg
Who made the Long Meg Stone Circle and what it was for, is a mystery. Was it a place of healing, of worship, trading, matchmaking, star-gazing or something else entirely? We shall probably never know, but we can look, measure, speculate and dream. Tonight, storyteller Malcolm Green will tell a story of what might have been. 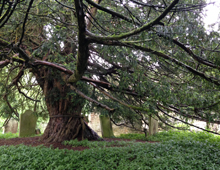 Pat Renton: The Beltingham Yew
Long long ago, even before your grandmothers time and way farther back still, lived a young yew tree and as the centuries past it put down its roots and watched, standing witness to all life that passed beneath its branches. From ancient rituals to whispered hopes and dreams, all of its ancient being filled with stories.

Archaeologist Paul Frodsham from the North Pennines AONB Partnership will talk about both sites and the storyteller will tell stories about what might have been.