Pascale Konyn: The Beaten Gold of Kirkhaugh
In 1935 Herbert Maryon made a brief excavation of a burial mound near Alston, unearthing questions which have grown more potent with time. One of the artefacts was an incredibly rare find, a single piece of pure, beautifully worked gold. Who was the burial for? Why was it in the Kirkhaugh hills? What is the meaning of this piece of gold?

The clues we have to date could take us as far as the Alps or link us to ancient mystical sites in Britain. It is possible that the very first glimpse of gold lit a fire in the heart of the beholder, let the mysteries of the Kirkhaugh Cairns light a fire in yours… 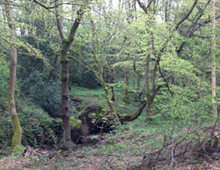 Chris Bostock: A Dark Tale from the Kings Forest
The Royal Forest of Inglewood hid secrets of loathly ladies, outlaw bands and the wildest creatures. Broken laws met with harsh punishments, but in the dark of the woods, hidden from untrained eyes, a story was taking place that would change lives and fortunes of foresters. Chris Bostock has unearthed a new story from the Forest of Inglewood.

Join us as archaeologist Paul Frodsham talks about the two sites and the storytellers tell us the real stories…..